Summer at University of Wisconsin-Stout has taken on a distinctively international feel.

Along with about 65 international students in general summer classes, another 36 students from four countries and one U.S. territory are or have been on campus for two to four weeks. It’s part of a new Summer in the Midwest program to attract more foreign students.

The students, who are staying in a residence hall on north campus, have visited local retail shops and restaurants and attended community events. Many have used the StoutBikes rental program to get around campus and town while experiencing city, state and U.S. culture.

“We hope to build on this,” said Scott Pierson, director of the Office of International Education. “One of our goals is to establish relationships with students who might come for the full term or come back for a master’s degree program.” 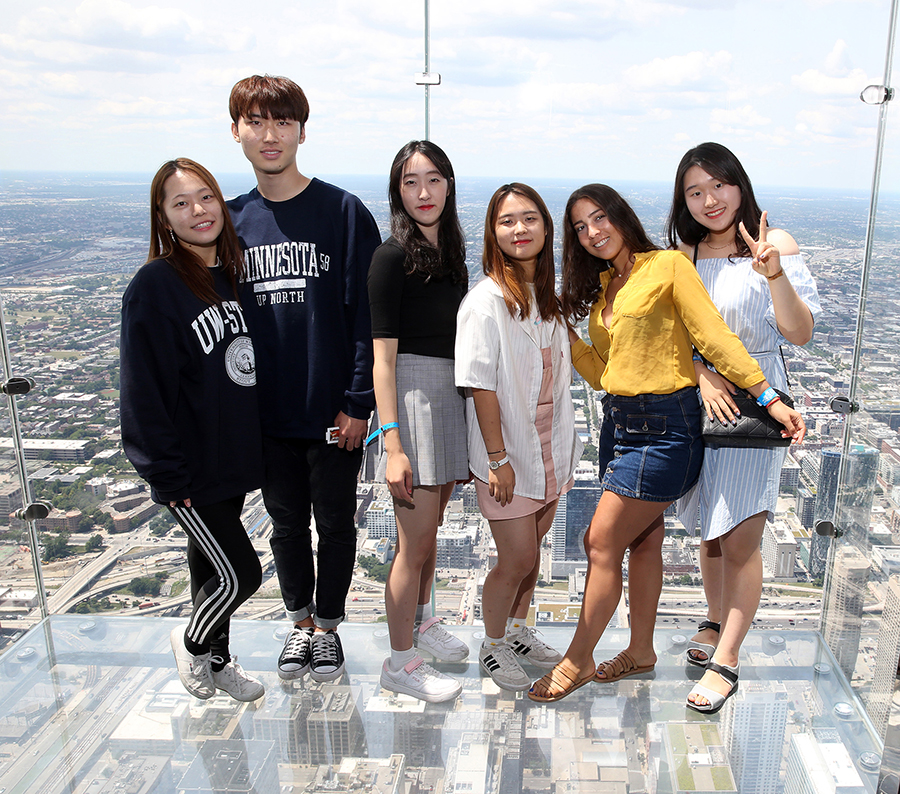 UW-Stout typically has had 200 or more international students during the fall and spring semesters.

The five special groups this summer are from China, Japan, Peru, Puerto Rico and South Korea.

Aside from Chinese students taking lab courses, most of the short-term visitors are taking up to three classes in UW-Stout’s English as a Second Language Institute.

Gladymar Betancourt, of Guaynabo, Puerto Rico, hopes to improve her English skills enough to land a job with the U.S. court system in Puerto Rico. She recently earned her master’s degree in social work from Inter American University, Metropolitan campus, in Puerto Rico.

“I have a good base of English but need to be better,” she said, noting the job requires English speaking and writing skills. 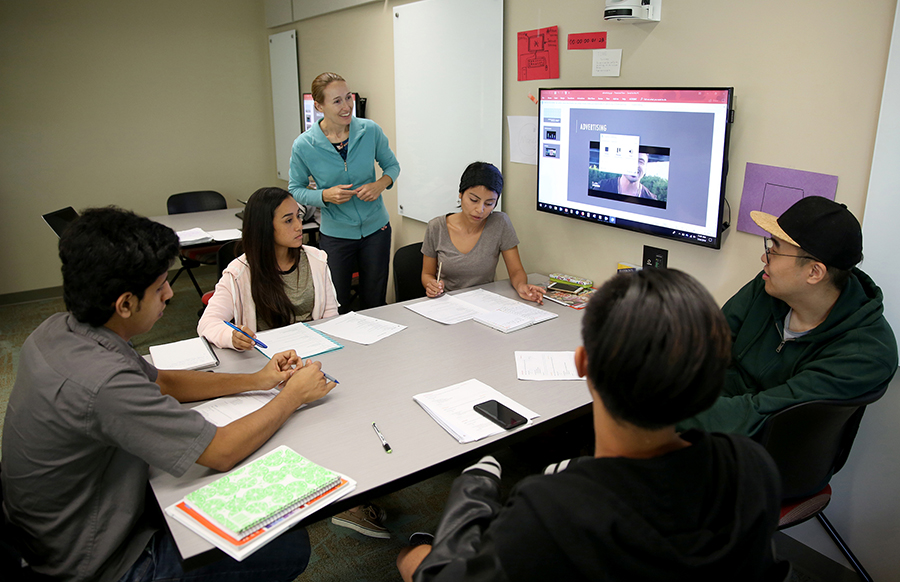 She earned her master’s after her family’s house was destroyed in 2017 by Hurricane Maria and they moved to her grandmother’s house.

“At first I thought it would be just the (ESL) classes here, but it’s giving you as a person the chance to see the kindness and hospitality of people here. There are a lot of things I’ll be able to take with me to Puerto Rico and develop,” said Betancourt, who had been to the U.S. previously but not the Midwest.

The Office of International Education has helped students enrich their U.S. experience by organizing a community potluck, Coffee with a Cop, company tours and trips to the Dunn County Fair, Mall of America, Wisconsin Dells, Chicago and more. 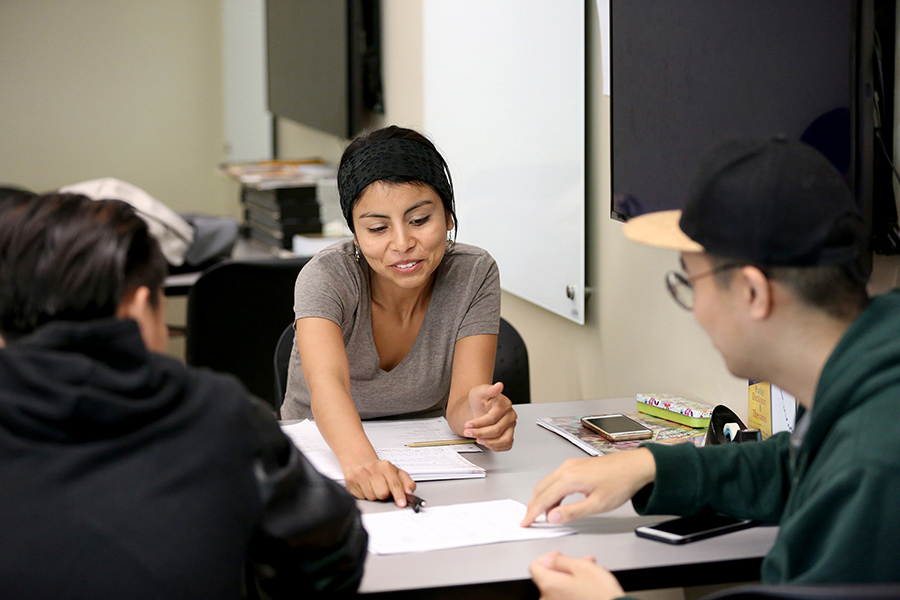 “It showcases our commitment to fostering a welcoming and inclusive environment,” Pierson said. “They’re really enjoying all of the activities here. They see how safe and friendly it is.” 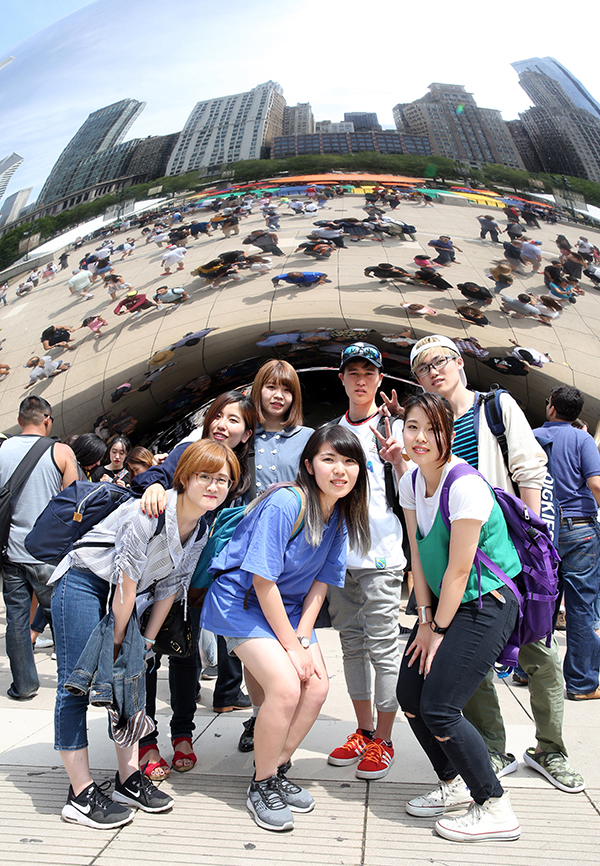 Another visiting student, Minje Kwon, of Seoul, South Korea, said that after two weeks at UW-Stout “my English skills have improved, and I’ve experienced a lot of things. It’s been a very useful time.”

Kwon, a sports health care major at Sangmyung University, had wondered what America, Americans and an American university were like. He enjoyed a tour of the famous local brewery, Leinenkugel’s in Chippewa Falls, and sampling the beer, as well as a meal of venison lasagna at an instructor’s house.

“I love how the American people say ‘hi’ and ‘good morning’ every morning. Everyone is very kind,” Kwon said. “I’d like to live here. It’s a beautiful landscape. It’s all green, and you can see the wide sky and all the stars. People are calm and safe — that was my worry. I had heard America was pretty dangerous, but here it’s safe,” Kwon said.

The Japanese students, from Trident College of Design in Nagoya, Japan, arrived with administrator Ryotaro Noro. They took four weeks of ESL and one week of design.

“If students can speak English they have more choices for jobs in Japan,” Noro said. “The students are enjoying every day. The weather is good, and the university is good. They like the small town. We feel very comfortable here.”

See a related story on the students from China taking classes at UW-Stout.

Top: A group of foreign students attending UW-Stout this summer stands on the Skydeck observation ledge atop Willis Tower, formerly Sears Tower, during a university-guided trip to Chicago. From left are Sujin Jung, Minje Kwon, Jounghyun Park, Yoon Sun Lee, Claudia Medina Luna and Juhee Han. The Skydeck is 1,353 feet high. Willis Tower, 110 stories and 1,450 feet, is the tallest building in the Western Hemisphere and the eighth tallest in the world.

Third: Clede Salinas Antezana of Peru works with other international students during a summer ESL class at UW-Stout. 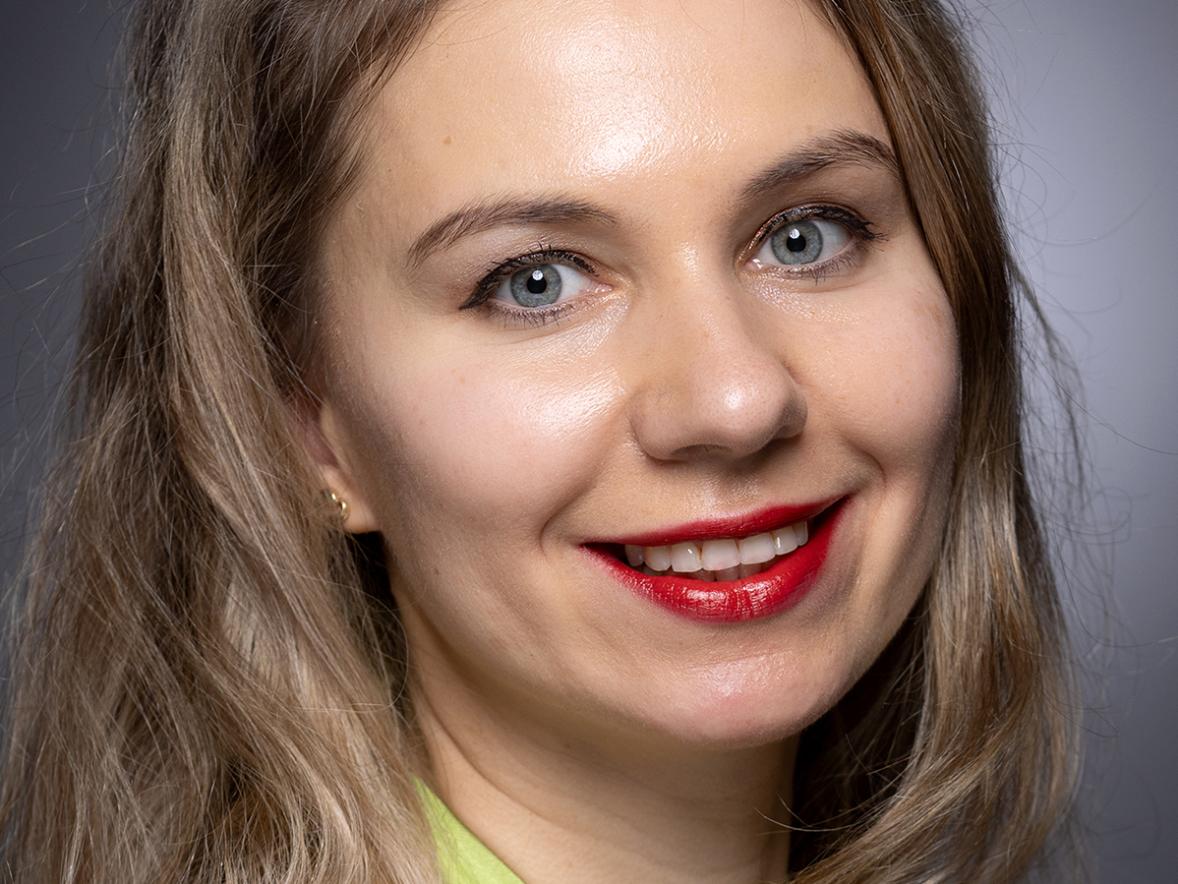 A special event featuring Ukrainian folk dances and poetry will be held at UW-Stout to help students and area residents connect with that nation's culture.
April 15, 2022 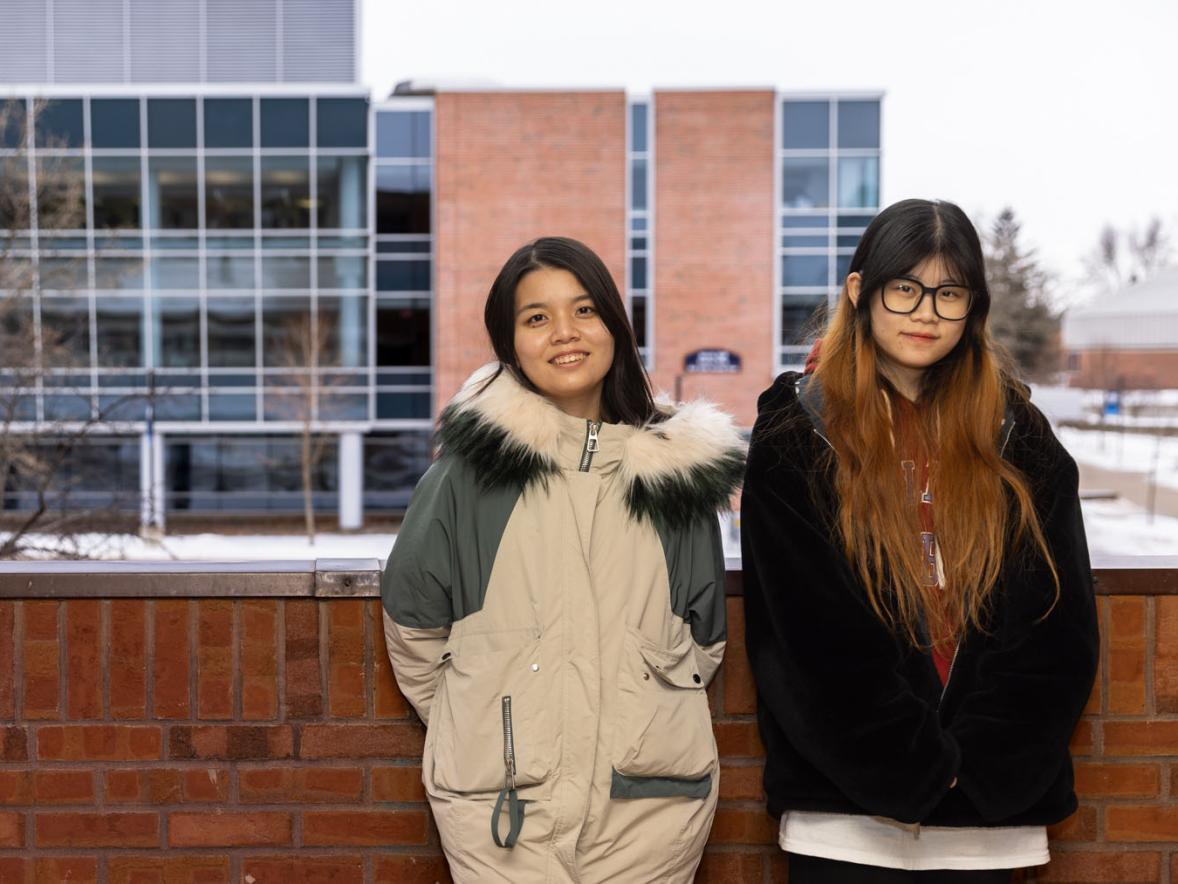 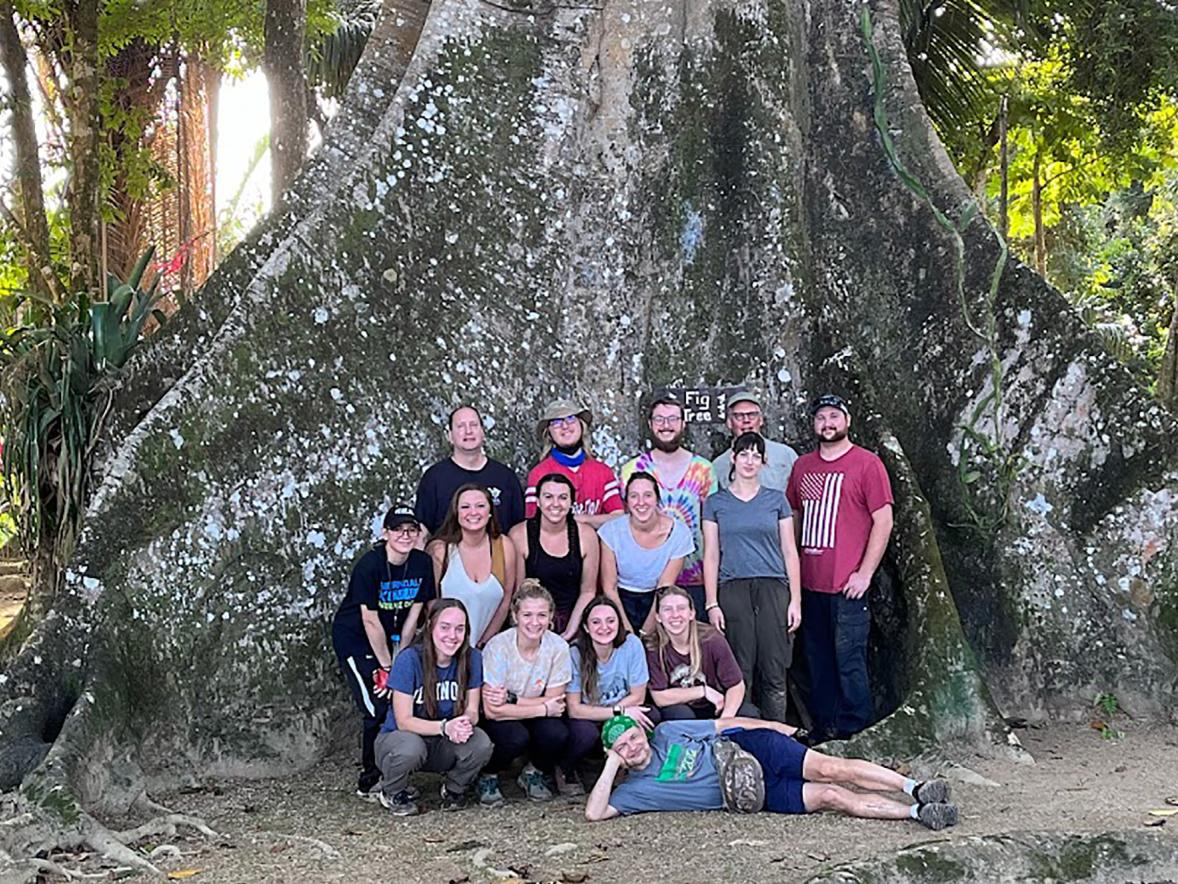 For Brianna O’Brien, it wasn’t just when class members hiked four miles up a mountain, guided by a naturalist, to breathtaking views of a double waterfall.
February 2, 2022